Good nutrition and physical activity in the older population 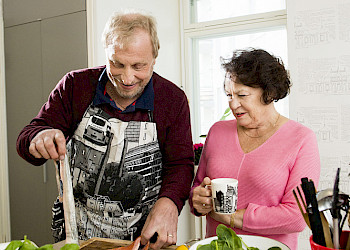 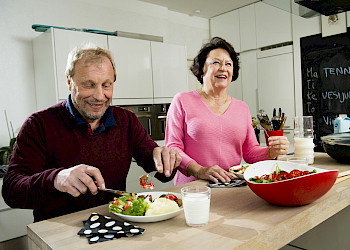 The population in Finland is ageing rapidly. The number of people aged 75 or over is expected to double by 2040.

The increasing number of older people is leading to an increased demand on health care. Aged individuals are often vulnerable to many illnesses, they are frail, and they have disabilities in self-care tasks. The role of nutrition in the maintenance of aged individuals’ health, management of chronic conditions, treatment of serious illnesses, and rehabilitation of functional limitations has risen to the top of the agenda for public interest and research during the last decades.

Good nutrition and physical activity are health-promoting lifestyle approaches in the older population. An inadequate nutrition contributes to sarcopenia, frailty, loss of functions and progression of diseases. Nutritional status is influenced by medical, physiological, psychological and social variables. Encouraging better nutrition and physical exercise is a cost-effective way of decreasing the progression of age-related diseases. As people age, adequate nutrition promotes the maintenance of health, physical performance and psycho-social well-being.

Malnutrition has been recognized as a common problem among aged residents living in institutional care facilities. Malnutrition is associated with certain diseases and impaired functioning, but less is known about its relationship with nutrition intake and nutritional care among aged residents. The assessment of the nutritional status of elderly people should be a part of their care. There are many tools for identifying the nutritional risks, but the most extensively evaluated tool is the Mini Nutritional Assessment –test (MNA).

Nutritional treatment, when carried out early enough, seems to have a positive effect on energy and nutrient intake in frail older people. It can lead to weight gain and increase physical activity. Oral nutritional supplements (ONS) have usually been the primary intervention when treating malnutrition. In various studies the intake of enriched food has also had positive outcomes in the energy intake of elderly hospital patients. Collective mealtimes in nursing homes and long term care hospitals provide an opportunity to integrate and implement good nutritional care. A pleasant and social environment during mealtimes may add a sense of security and satisfaction with life.

Older adults with memory disorders living at home alone or with their spouses are significant target groups of nutritional care and treatment. In these groups, the risk of malnutrition is increased as they have cognitive impairments and often older spouses may also have numerous diseases and functional defects. The possibilities of nutritional care and treatment remain largely unexploited. Nutritional information and support in nutritional problems are important methods in preventing and improving Alzheimer patients’ and their caregivers’ nutritional status and quality of life.

Society for Gerontolological Nutrition in Finland